Yesterday I got my lucky paws on two copies of ‘Svensk DAM’. It is always a treat to lay hands on trashy foreign language magazines, the more out of date the better. Despite the fact that glossies follow the same pro forma the world over, it’s fun to decipher familiar things through the lens of another language. 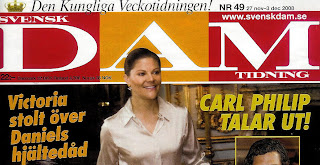 The thing that is immediately apparent is the frightening homogeneity of Western culture, from the ideals of beauty and fashion to the sort of place you want to spend your holidays. The anti-ageing ads are the same. Madonna and Kylie Minogue feature. There’s a fashion spread of a generic woman sporting an inexpensive jacket, which has been jazzed up in five unappealing ways. A baby-faced chef telling us how to cook. And a woman prancing on some stairs describing how she rebuilt her life after bröstcancer and Dancing with the Stars. 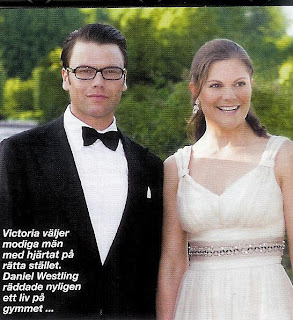 Sweden is one of the furthest places you can get from Australia, yet their trash is virtually identical to our trash. Does that blow anyone’s mind? They are literally on the other side of the planet. I have compared it to Woman’s Day, a magazine I always peruse when visiting the parental unit. Every page of Woman’s Day is totally insane and goes against every one of my feminist principles*, yet I flick through it every time I’m at the olds.

I could have put my queries through Google and Babelfish, but think it far more entertaining to make up my own version of events:

The gloriously-chinned Kronprincessen Victoria features on nearly every page with her personal trainer fiancé Daniel Westling (I like his little Clark Kent-ish visage. What happens when he whips off the glasses?). Often Victoria is juxtaposed with Princess Mary, much in the 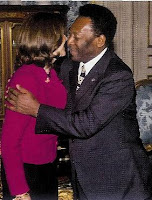 same way Princess Di and Fergie were back in the day. Are they competing? If they aren’t now, I’m certain they will be soon.

Pelé cops a quick feel here with someone described as ‘sin drömdejt till slut’. A bit harsh, isn’t it? I wouldn’t relish being a dark-skinned person in Sweden – you’d stick out like mad with all these pale, willowy ‘blonda bimbons’ wafting about. Although if you were Pelé visiting from Brazil I’m sure you could turn the situation to your advantage, something he’s clearly doing here with relish.

Andreas Wilson at the right caught my eye, and I had to delve further. What does he do? How come he is so smug? Why does he get dressed in the dark? I can tell you he had something to do with Erik Ponti’s film Ondskan. He is dating Nicole Janota (the only brunette in the magazine) and is 28 years old. It’s possible he sings, and has done a version of a Supertramp song. Either that or he has them on his iPod. Like all celebrities, he enjoys yoga. He will shortly travel to Thailand with his exotic girlfriend, and I think the last paragraph is the question all readers of Woman’s Day are familiar with: “Kommer ni kanske hem med ringar på fingrana?” They’re not talking about fingerbanging you dirty sod. I believe they’re asking if our bearded hero will pop the question on some palm-fringed beach. Coy Andreas has only this to say on the topic: “Det får vi se!”

If you stick a tiara on it, it becomes interesting. The obsession with the royals continues in Svensk DAM, and Prince William and Harry, Sarah Ferguson and even Camilla Parker-Bowles rate a mention. No more ridiculous than the Woman’s Weekly features on glamorous Queen Noor of Jordan or Princess Sayako of Japan, eh? (I have to admit I luuurve reading about royals in far-flung places. My latest obsession is with Jigme Khesar Namgyel Wangchuck, the suave 28-year-old King o’ Bhutan. He is part Thai matinee idol, part Japanese crooner, ALL ELVIS. I would teach him a thing or two about Aussie women, let me tell you)

Only in Sweden, or The Princess Bride, would newlyweds looks like these two below. 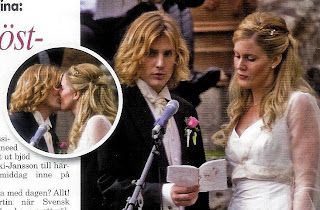 The celebrity fixation figures large, and get this – they’re the same celebrities we’re subjected to over here. Even in Scandanavia one cannot ever be free of the grotesque parody of girlhood that is Cameron Diaz. In her photo she has wrapped herself around someone called Paul Schulfor, a fotomodelhunken. David Duchovny has checked in to a sex addiction clinic, or behandlingshem för sexmissbrukare. Ghostly Anne Hathaway is snyggingen Josh Lucas. Diane Kruger is a fullständig knock-out.

Food is always a bit repulsive in Woman’s Day. It’s often concerning ‘seven ways with Spam’ or ‘mince your way through the New Year’. And in this respect, Svensk DAM does not disappoint. What the shit is this. A giant crab stick? With dill gone to seed on the top? The ingredients read ‘kungskrabba’, ‘slanggurka’ and ‘smör’. What is that white foamy stuff? Did someone salt a snail? Perhaps that is the smör. 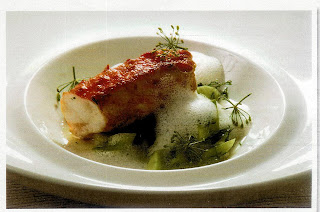 The Höstmys article is what the readers of Svensk DAM pay their money for. It’s a double page spread of assorted people under the heading ‘Kändisarnas bässta tips for Höstmys.’ What is this Höstmys? And where was I?

Alexandra Charles holds up a calendar of nudists sitting in a field behind a picnic. She clutches this as if to say ‘here! It is self-explanatory, no?’ Whether this happens before or after she lounges nude with a silver fox I cannot say, but she will be listening to opera, jazz and Swedish folk music and receiving a ‘brasilianskt.’

Were you wondering how Anneli Alhanko would spend her Höstmys? I was. This hovdansare praises her wonderful family, and will be watching a romantisk film. Let’s hope she puts her ‘fantastisk dotter’ to bed first. 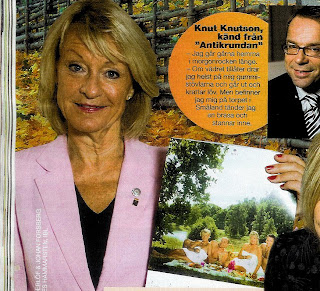 Katarina Hultling, sportprofil, will be wearing a ‘snygga stretchbyxor and a t-shirt described as ‘vit’. As she dons these items, she plans to quaff a glass of red wine and some cashewnötter.

After studying this article at some length, I conclude I am no more enlightened about the nature of Höstmys, and deduce it is either romantic or lustful in nature.

In conclusion, Svensk DAM was a rattling good read. There were pictures galore and tips on getting my mörka ringar to ögonskuggor. I had to search hard for any differentiation from Woman’s Day, and found two:

Opera is mentioned many many times. Many times. Everyone enjoys listening to it in their down-time. Everyone is either on their way to an opera, coming home from one or planning to attend one in the near future. Princess Mary dropped her handbag at the opera, and 300 thrilling words were devoted to it. This suggests Sweden has a more enriched culture, more than one in which obese people have heart attacks after a particularly exciting six at the cricket and decide to audition for The Biggest Loser.

The social pages at the back are a bit like the ones in ‘Tatler’. Swedish notables still like to grasp small children in wheelchairs, plait their pony’s mane and procreate, so nothing new there. What is interesting is that no-one is particularly young, good looking or glamorous. It’s essentially a bunch of older people in trenchcoats and bejewelled opera capes taken in bad lighting. No-one has double-barrelled names, no-one has too much chest out and no-one looks particularly thrilled to have their picture taken. All look poised, polite and clean.

At last, something that conforms to my ideas of what Swedes should be like. Happy Höstmys!

*Trashy magazines operate from the position that all women will only read about marriage, babies, celebrities, royalty, diets, heath & fitness, posh houses, cosmetics and gossip. It’s well documented that the entire point is to sell advertising space and to convince women they shouldn’t be happy with their lot. This creates fear, unhappiness and dissatisfaction, which in turn is supposed to incite people to spend more money. Thus the cycle continues. You only realise how insidious these Western ideas of capitalism and femininity are when you get to W. Africa where no-one can afford anything and this stuff doesn’t exist.

Pics: All men profiled are called Per, Olle or Claes, and represent the cream of Swedish manhood ==> 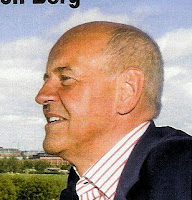 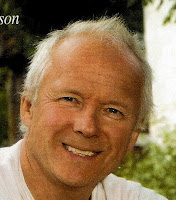 3 thoughts on “When the whole world is your umlaut”